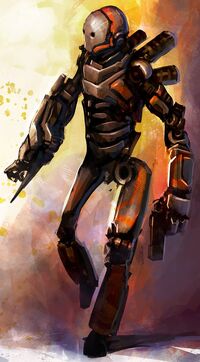 The first meeting of Coraabians and Reddans did not happen on We'Rd. The Reds had in fact operated on Coraab decades before their fleets arrived. Their autonomous units obtained all the necessary residence permits and nobody suspected anything weird; Coraabians were used to myriads of races and entities living among them. The attack itself had been preceded by a long period of sophisticated espionage. Reddans were unarmed, polite and their interware allowed them to become full-fledged citizens of the Coraabian centropolis. The situation became so absurd that some Reddans were honored with the proposal of honorary citizenship in C'Ora. The fatal underestimation was based on their fake identity - everybody believed they were Khoptidian missionaries.

The Red-bots truly were unarmed. Yet soon after the conflict broke out, terrified Coraabians were to realize that one Red-bot was able to assemble a hand diffuser from another Red-bot's body in a matter of few seconds. The weapon was able to spray a strong concentrate of bio-acid all around it which made it brutally efficient in the densely populated central Sectors.

The bio-acid 9-KUUL has a unique feature - after being sprayed, it forms a thin but very large cloud. The cloud is able to corrode molecules of a chosen atomic number. The number can be even calibrated remotely at any time. Having guessed their chemical composition right, a single couple of Red-bots were capable of causing fatal damage to nearby creatures and buildings.