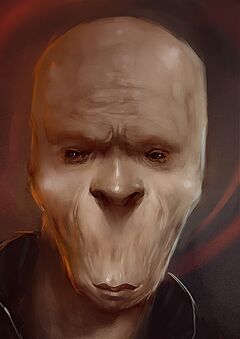 Raido - an extravagant snitch who despises the world that "doesn't understand him."
(Coraabia Artist: Markus Lovadina)

Raido's life is a perfect example of organised crime intertwining with the civil sector. Shortly after graduating, this introvert Miner started working as a dispatcher in X-Chent, the largest starport on Coraab. He shortsightedly borrowed money for an overpriced flat in the city-state of Bochezai. After dramatic budget cuts in xentic docks, he soon found himself unable to repay the mortgage from his modest salary. In an attempt to get some cash, he created even bigger debts among the local loan sharks. Desperate, he tried to sell the damned real estate. Unfortunately, the new industrial zone slowly encroaching upon the neighborhood made it lose most of its value. Soon, Raido struggled to even make ends meet in Bochezai.

Local galagoons offered a helping hand to the bankrupt Miner - they would gradually repay all his debts if he worked for them inside X-Chent. Thus Raido became a pawn in criminals' hands. He was forced to leak secret information about incoming magravs and the cargo they carried onboard. Every day, he faces the risk of being uncovered.

Poor Raido has no clue that from the very beginning, he has been under the watchful eye of the Iontal customs office ImmaDOR and its head, Mawazaan. The authorities patiently wait for the right moment to lure the galagoons into a trap that would eradicate the entire Bochezai clique in one fell swoop. Raido is therefore almost guaranteed to soon exchange his cosy apartment for a somewhat less luxurious cell in one of Coraab's many prisons.