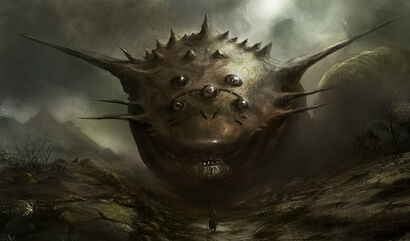 It took long centuries for Traxol architects to realize what a wonder do spore biotopes at the south of their planet contain. For a long time Pukeworms were considered a mere pest, clumsy three hundred meters long giants with tubular bodies able to devour sixty tons of spores daily. Researchers discovered that its puke (worm only has one orifice for both feeding and excretion) are nothing less than a perfect organic building material. Pukeworm nests were soon replaced with gigantic breeding farms, pukeconcrete production dramaticaly boosted the planet's industry. Traxol supposedly produces up to half a trillion tons on this extremely durable mixure a year, at least third of it for the export.

In order to escape Traxol pukeconcrete monopoly, Coraab, ordered sixty worms and built several pukefarms. The plan ended in complete disaster: forty three worms died during transport over Coraabia, twelve during lengthy handling on Bochezai starport. Four had to be put down because of their size not fitting into the transport harness. Last worm fell for its death highways of C'Ora.