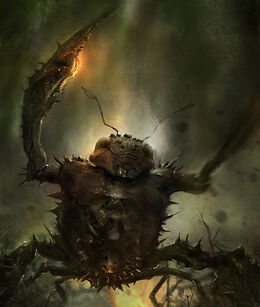 Traxollian sharpsheller swellingian - known as pukebug by common folk - was forced to become an unwilling parasite of pukeworms over the course of its evolution. By consuming the nutritious spores, the titan-like pukeworms gulp also a plethora of other beings, which were not able to escape in time. Pukebugs adapted to this common phenomennon with remarkable elegance. Thanks to small thorns, which cover their bodies, these bugs literally attach themselves to the inner side of the pukeworm's mouth. Sometimes the pukebug is fortunate enough to attach itself using his back, which leaves all his claw-like limbs free to catch the incoming food for the rest of their lives. Pukeworms living inside a pukeworm have a significantly stronger exoskelleton than the freely living specimens. It is almost a wonder that nobody found any industrial use for its shell yet.

Pukebug is able to survive the gulping and a long presence in the digestive tract. Pukeworm's peristalsis pushes the spore mash even through the resistance to the devoured pukebugs, which may double their size while staying inside. In defense, the bugs release swell-causing enzymes, which fasten up the reverse movement of the pukeworms chyme. The cunning sharpsheller gets rid of the food surplus with its pukemouth.

The eggs of pukebugs mature on the last pukeworm's segment. when their time comes, the majority of pukebugs release themselves from the mouth and get consumed. Together they force the pukeworm to puke out the new generation, which would not be able to last long inside the worm. Traxolians learned to use this procedure to increase their pukoncrete production without compromising the material's quality - the chyme is not able to fully mature in time.