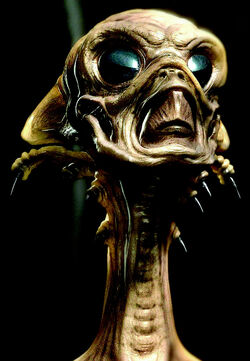 Yyäzu-koll Yamdra is the supreme representative of Agan and one of the highest representatives of Cosmopolitan worlds. Gopchans are a rare minority that came to the Agoadan from now desolate Dohög. These chitin-plated hermaphrodites are well known for their accelerated genesis, newly hatched individual is able to reach full maturity within a few Tu. Mogras keep warm relationships with Gopchans and do not hesitate to appoint them in a number of prestigious positions - as they possess advantageous mild nature and perfect memory. Yamdra, at the age of twelve Tu, got into a position of rector of the prestigious Be-Kunube University and just a step from the government. After Prefect Tandib's death, majority of Mograda elected him as a head of the government.

Yamdra does not enjoy much popularity among cosmopolites, mainly due to unpopular austerity measures which reportedly inhibit the growth of Agan economy. Politicians, however, can not praise him enough. In his function, he doesn't employ any assistants or interpreters, he organizes his whole agenda by himself. The Gopchan doesn't even have to sleep thanks to special drugs he takes.

Prefect Yamdra was involved in one of the biggest corruption scandals in which Agan government privatized oXo xottery for a ridiculous price. It is only a matter of time before this fact becomes public, which may result in his forced resignation - unless Yamdra dies sooner. Residual toxins contained in the medication are permanently accumulating in his ganglion.