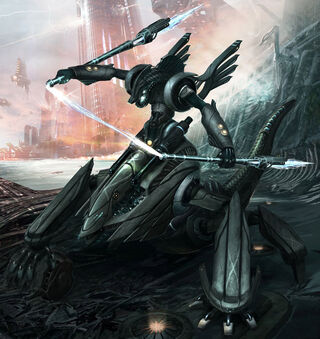 "As if it wasn't enough that victims of brutal accidents are often found turned inside-out - even their pockets are inside-out." -unknown feldsher from the Blue house.
(Coraabia Artist: Andrew Kim)

They are called scavengers - whenever there is a murder in C'Ora, you can be sure the first one to show up to the crime scene will be a poly-coroner in his antigrav. Their speed is necessary as they often have to freeze the bodies before they decay along with any possible evidence. Many Xenno races are organisms with atypical molecular structure that decompose extremely fast in the atmosphere of Coraab. The remains are then transported by poly-coroners to specialised centres - the so-called Blue Houses. There the remnants are subjected to a thorough forensic expertise required to determine detailed circumstances surrounding the victim's death. Poly-coroners have an absolute right of way in the megapolis - they have to navigate through the complex infrastructure quickly and get to the crime scene first.

Some poly-coroners abused their privileged position in the Coraabian traffic - in addition to collecting corpses, they moonlighted by distributing food, escorting and even as couriers. In the body freezers, they used to carry frozen goods or smuggled contraband.

The rampant corruption among poly-coroners was stopped only by a new metropolitan labor law from 2844 Tu that imposed a duty to record the entire work time by sensors in coroner's helmet. It is said that this minor ordinance hurt the criminal networks more severely than the combined effort of all district officers together.