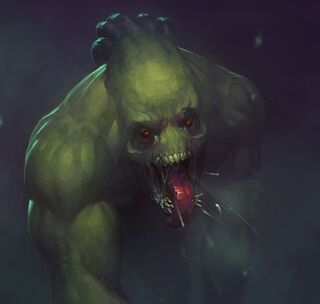 Faazoku in the evolutionary stage moggo, which is generally considered to be one of the most dangerous ones.
(Coraabia Artist: Vladimir Bopchara)

Also known as Korr-hi or faazoku (phasecreature) in scientific publications. Kurri are yet another strange beings from the Xennozone, spawned under the influence of many contradictory phenomena. According to CuCaanish xennoarchaeologists, the kurri were originally a colony of mycomorphs dragged to CuCaan on an exo-comet from Xao. Thanks to its stalwart nature, kurri merged in gradual symbiosis with local species and began to genuinely replicate their looks and behavior. Thus there exists an endless variety of different kurri of various shapes and sizes. They live in the frozen polar lakes, jungle canopies, underground or even the periphery of large settlements. Kurri's sole driving force is its unsatiable need to process all substances around - its resistant digestive tract can process practically anything.

Their specific skin color became a characteristic feature of all kurri. For currently unknown reasons, these post-mycomorphs are unable to change their skin's shade onCuCaan. Kurri's color even got into the general color scheme BT-5, which is a standard in all advanced corners of Coraabia.

The kurri changes its phase several times during its lifetime. It usually begins as a protozoan or a meta-insect and gradually adapts its structure to a more complex structure of vertebrates, leatheros or membranos. In their terminal phase, kurri grow up to the size of buildings, forming biotic mountains and muscular giants. Their danger lies in their appetite - they devour up to a hundred tons of matter per day in the most extreme cases.