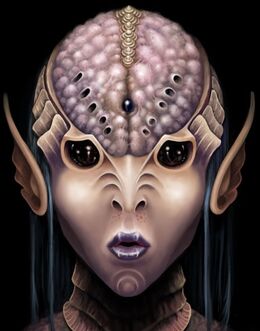 Paala Kor has been held in such reverence among Baians since her death that in 3880 Tu, they even named one of their most important Annorian cities after her - Paalkor.
(Coraabia Artist: Peter Prabowo)

Baians, also dubbed as Black Eyes, have been an important part of Annors' (White Eyes) history for millennia. Their mutual coexistence had been filled with an intricate mixture of bloody war and fragile peace until both cultures agreed on a final treaty promising complete Baian assimilation in 3240 Tu. Soon, many a Black Eye successfully climbed the Annorian social ladder. The first Baian aristocrats then hailed from the House of Korraiach. When old Pal Raia sent her youngest daughter to a prominent Annorian university, little did he know that she would one day become one of the most important Annorian diplomats in history. Paala Kor immediately proved to be a talented orator, displaying an aura of confidence and tranquility. It was indeed her who played the crucial part in the events later known as Chaalka-tei (Chaalkgate).

In 3305 Tu, a spaceship from distant WaalkWak landed on Annor. Its crew soon oficially met the Annorian delegation. However, the arrogant Annorian lords all but disgusted the visiting Waks. Luckily, the Baian delegate Paala Kor saved the day - her brilliant program consisting of an opulent feast or thematic hunt for rare ruuks made the whole sticky situation disappear.

Naturally, the formal veneer was not of primary concern to the foreigners. Behind the backs of Annors, Paala Kor signed astronomical contracts for export of chaalk wood. After the deal was uncovered, Paala was labeled as a high traitor and "Baian whore". Needless to say, the ensuing years of prosperity quickly showed that opening Annor to outside influence was the only logical step forward.