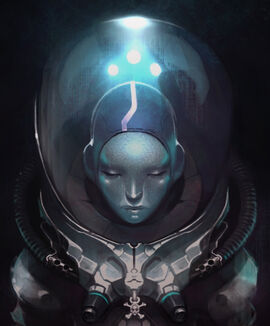 Ozoon is a symbol and patron for Orbitas; therefore, girls at the university greet themselves ozooa (be ozooned).
(Coraabia Artist: Manuel Augusto Dischinger Moura)

Ozoon Tal-Rakai entered the great Orbital University at an early age. The talented and charismatic girl first studied in the field of paraphysical hermeneutics, but she soon hit the glass ceiling of prejudice and mockery from teachers - the field was previously reserved only for the members of the opposite sex. Ozoon gathered other female students from the university (and there were not many of them) and sparked a series of on-campus protests. The unrest gave rise to the well-known Gulic educants and the rector Ikram Dogo allowed the establishment of a new educational field OR-BI.TA. Ozoon soon become the first orbita who managed to reach a pedagogical position. Unfortunately, she died before she could fully develop her potential.

Ozoon had ambitions to transform orbitas into an autonomous learning cell which would not be subordinated to the authority of Bi-Tal. But logically, this did not bond well with some higher-ranking professors who had suppressing of the autonomy of smaller departments as their long-term policy. It is said it was the newly elected Xenno rector Beupo XII who was behind the malfunctioning exo-suit in which Ozoon was exposed to a lethal dose of radiation during a routine exercise of novices.

Some say that Ozoon had a clandestine affair with Ikram Dogo and therefore the old rector generously allowed her to establish the new field of knowledge. Whatever the truth was, despotic Beupo XII completely ignored the long-established traditions anyway. It was a miracle the orbitas have survived the dark years of his term and were not canceled along with many other disciplines disregarded by this authoritarian xennorector.