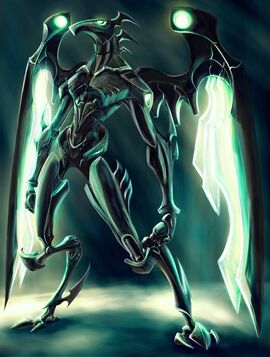 Ostrodon is capable of reaching the speed of 400 kph in a dive thanks to its unique method of sliding glide.
(Coraabia Artist: Almeida Thiago)

They are called Fonargh Son – Those who see. Heavily armoured para-birds have the best vision far and wide; they are able to target and carefully track creatures the size of a closed fist even from a height of eight kilometers above surface. This proud and ancient nation which descended from the only mountain biotope in the North of the planet has been closely cooperating with the Annors s for many centuries. Annorian Lords left Ostrodons their traditional territories untouched in the exchange for their faithful service. In turn, they helped their lieges with tracking prey or locating the enemy. However, their services are being replaced by high-performance satellite networks in the Era of Technologisation of Annor and so Ostrodons focus at another of their specializations - commercial trapping of wild ruuks.

It requires maximum cooperation from an Ostrodon hunting squad to hunt down such a beast like keporuuk, for instance. An air squadron counting three to five members firstly chases a ruuk for few hours so that he gets tired enough. Only then they start with their swooping attacks - they are not using their beaks but the armoured forehead so that the paralyzed victim would not lose its price because of a laceration.

It was possible to see a sad spectacle from time to time at the Annorian Royal Court many years ago - Annor Calephar's chefs served carefully selected meat from Ostrodon fledlings at lavish banquets. Fonargh Son still recall this condemnable act as a cautionary example that the "White Eyes" (Annors) are never to be blindly trusted.