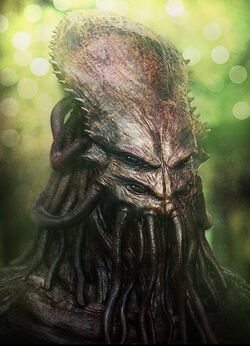 Officially titled by the name Xallach Omt-Coppriek. Forneek is inhabited by a tough race called Zu, which traditionally elects its warrior meta-king. At the end of the period K-tee, he is forced to undergo a ritual duel with the finest warrior in his army. The guardsman is entitled to kill him in the duel. If he does, the ruling class Eek will choose a new meta-king and the process is then repeated over time. Om Xalok enlisted in the meta-guard in 4209 Tu. A mere two years later he is allowed to "die for Eek" during K-tee. Nobody expects that a young Copree might defeat the old Inco-Repto, no matter how well trained he could be. However, Xalok surprisingly succeeded. After a furious battle, he took out a banner of supreme leader over the nation from meta-king's tentaculum. Eek then showed him respect with an epithet Coppriek (The Tangler).

The new meta-king unleashed a great restructuralization of society immediately after securing the throne – he canceled the old ceremonies and deprived Eek of all its authority. This unprecedented move would shake with the strongly traditionalistic society. Nevertheless, Om Xalok went even further - in 4212 Tu, he established contact with alien Annors, who have been coming to Forneek to hunt for centuries. The era of prosperity began.

Coprees have existential aversion to weapons. However, their fights to the death resemble a horrible slaughter. It is said that the last Forneekan K-tee lasted several hours. Om Xalok continuously tangled Inco-Repto and began to crush him in a strong grip. The meta-king still managed to tear his breathing bag with a skilled grip of his proto-tentacles. Then his corporeal body snapped and the duel was over.