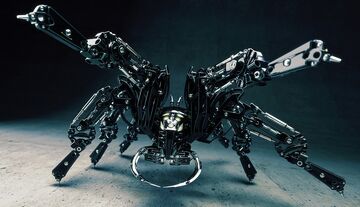 Oktapods are used for various purposes: disposal of suspicious bags, scouting collapsed buildings, or picking up evidence in badly accessible locations. The agile eight-legged units can do it all. Oktapods arrive where needed in their own transport capsules and act independently on other forces. An oktapod is remotely controlled by a Gorko-bot over a coordination wall or by a specially trained operator sitting in front of a control panels. Oktapods may be switched into an autonomous mode while maintaining most of their abilities. Their main advantages are flexibility and low production costs - the drawbacks being low firepower and effectively no protection of its small frame from external damage.

Oktapods are able to shoot out their mandibles as a powerful taser with effective range of several meters. As long as at least three legs are operational, they are still able to move. While a unit of nimble oktapods can easily command respect of a civilian crowd, its effectiveness rapidly deteriorates when facing an armed enemy.

An unforgettable experience was a grand parade of police forces staged in the central Sectors in 4210 Tu. All eighteen hundred police oktapods performed an intricate choreography crowned by forming a tens of meters high moving super-sculpture capable of marching down the hundreds of meters wide boulevard Konkiego.