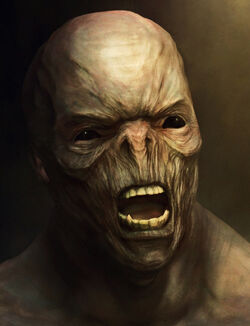 A disfigured okokh has only a minuscule chance of obtaining an honorable place in the society. The majority of them end up as beggars or sub-squatters.
(Coraabia Artist: Riyahd Cassiem)

Any okokh is an outcast in the eyes of a prim and proper Unliving. A murderer, ruffian and desperado who is on the run all the time. All that is left for him to do is to change the Sector or to get lost somewhere far in the Periphery; his community will never accept him again. Ages ago, a murder within the Unliving community was not considered a crime according to Miners' laws. Therefore, it was a moral responsibility of the community to sentence such individuals according to their internal laws – for example, as preached by Yach min-logs. In case the offender came from an Ilokaj tribe, he was labeled as an okokh (an inferior being), and the local Yach-Drog cut off his nose so that even the lowest Vatter would recognize him and spit in disgust when it passed him on a street.

The first goal of any okokh was to earn enough to buy one of the expensive synthetic prostheses that would hide his permanent brand. In some sectors, the omnipresence of this solution has gone so far that when Unliving met for the first time, they tugged each other's nose - apparently to make sure that the other one was not one of the despised okokhs with an attached substitute.

There was a scandalous case when one of the okokhs won a jackpot in the XotLotto. A sub-net channel GronKHA made a big mistake and published his name, which caused an outrage among his fellow Unliving tribesmen. For a few weeks, a large community of them camped in front of the seat of the XotLotto, ready to rob him of all the Xot he won and of his bare unlife as well.