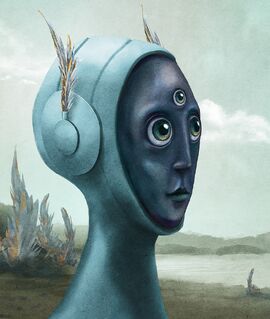 Och-Mal was a member of middle-class Mal family that had served as honor guard of the sacred plains Tokgo. The office was not paid but Mals received for their services pal-pot, a traditional thank you gift in the form of tasty combination of selected Kokranic high-calorie delicacies pal and mental ability stimulating drinks pot. Och-Mal spent his hours of duty monitoring the horizon, enjoying the delicacies, and awaiting the arrival of meta-locusts. While they appeared frequently, their swarm was luckily never as big as during the days of his ancestors. Och-Mal took his guardian responsibility very seriously and in decades of his services, not a single meta-locust sneaked by his sight.

The office of protector of plains Tokgo was tailor made in ancient days for valiant Pow-Mal. His strong mental attack stopped a gigantic swarm of voracious meta-insects rushing through the groves of Tokgo in its tracks. Billions of meta-insects started to devour each other after Pow-Mal used his psychic powers, their poisonous bodily fluids irrigating the soil. As a result, one still needs a resistant protective suit when walking in the area.

Sadoi possess a sixth sense which makes them impervious to any suprise attacks. That is why it was very unexpected when a small swarm of meta-insects threatened an orchard close to borders of Tokgo. It was here where Och-Mal's dead body was found, his eyes prolapsed and his overall grotesquely swollen. Tiny streams of purple blood were a clear sign of meta-insect poisoning.