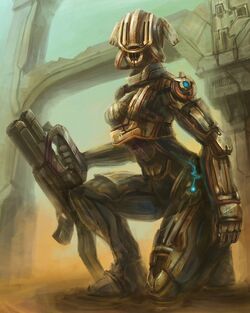 No Miner could say he explored the Coraabian system as thoroughly as Nwollo did. This young mercenary usually flies her Agrava, called Bomha, between Bochezai starport and local string hub Gath-9 on the very edge of the system. In her scarce free time Nwollo likes to fly off the bi-ion routes in hopes of discovering some new and unknown places. Her ship is fast and agile - she had the expensive custom modifications made in famous Khalfass shipyards. When escorting great Magravas isn't lucrative enough, Nwollo leaves for Khoptid, where she trades with used ship parts. She is well known for her honesty and pedantry - not a single time did she not make the delivery in time.

Nwollo doesn't oscillate to Khoptid just to get some used jets ans old nav-interware. In fact, she works as undercover agent of Min'Oran Zomb Valigursai. Through her he sends rare Yach min-logss to Khoptidan Cardinal Kerong himself. For other Zombs, this would be an act of high treason, so it needs to be done in complete secrecy.

Miner Nwollo once witnessed scene of police Agrav completely massacring honored delegate of Cloud I-Iluwe near Gath-9hub. The Exomorph wobbled into the open exospace, but that is strictly forbidden in the String hub vicinity. Authorities gave her huge amount of Xot to keep silent and labeled the event as an accident.