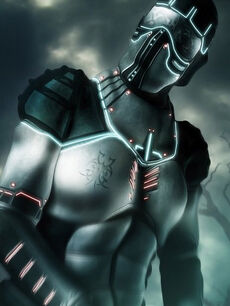 Numax would be a true hero of Coraabian law enforcement forces - if it was actually him and not his identical clone, loyal to the government authorities.
(Coraabia Artist: Markus Vogt)

When young novice Halrek NuThorra first arrived at the precinct of Planetary Kops at C'Orian Sector 5, he immediately told his colleague Ploy that he would do his job "on max". Little did he know that he just earned a nickname for the rest of his career. His co-workers accepted NuMax warmly and he soon started to achieve extraordinary results. Arresting the notorious villain Undang, saving the audience at xenocabaret SelZe-Gor from mass etching by blitkotin - which had been placed inside the fire control jets of the building by eco-terrorists - or successful resolution of the case of fake Bau-Zondian prince were but a few of his heroic adventures. NuMax still works on max and his supreme effort is given as an example to others.

Few years ago, Numax almost hung up his career of a popular metropolitan kop for a well-paid job at the Intergalactic Corps. However, after his good friend Fi-Dan explained the way it actually worked at IC, Numax did not sign the contract. He kept his moral integrity but his dreams were long haunted by a vision of a threefold salary hike.

Unfortunately, Halrek NuThorra has been dead for a long time and he was replaced by an identical clone stationed at the Planetary Kops by InCorps. While arresting some high ranked members of the InCorps, the policeman uncovered a lot of compromising materials that led to Hermes himself. His execution was masked under the pretense of a work offer and promotion.