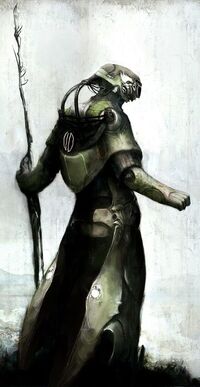 Through the garden of this world, I've worn my ree for ages. But I never thought any lop'teekaai would be so close to me. - Radiocarbon
(Coraabia Artist: David Munoz Velazquez)

Nugos belong among the evolutionarily more advanced Dung subtribes. Compared to Mono Dungs, Nugos are relatively civilized and capable of maintaining simple dialogues, which was one of the reasons why they became popular Zomb companions. These Dungs are concentrated mostly in peripheral areas of Coraab like Wa'Ghra or Moi'Nu. They possess enormous strength and they turn into merciless killers if they ever get into a skirmish. These traits make them perfect bodyguards for a large number of dumpdiggers, who require protection against hypomors that infested these areas, attacking virtually everything that moves. A larger group of Nugos is able to defend their master with sophisticated and deadly tactics. Such a luxury can be afforded only by the wealthiest Coraabian adventurers, though.

Nugos have a weakness not shared by other subtribes - their body shell is quite fragile. Therefore, these Dungs often procure exoskeletons that protect them against lethal radioactivity. Their favorite weapon is a spear with a tip from pure corabit. In the hands of a skilled Nugo, this weapon becomes a truly deadly tool. Records cite a case when a Nugo impaled five hypomors with a single spear thrust.

Rumor has it that services of Nugos were used even by the most famous dumpdigger on Coraab, Radiocarbon. Up to a dozen Nugos allegedly accompanied him to the most remote corners of the Periphery. One Nugo supposedly rescued Radiocarbon from certain death thrice. The Zomb was so grateful he even generously addressed him as "karru" (friend) from then on. This noble Dung finally met his end in hypomor's talons shortly before Radiocarbon met his himself.