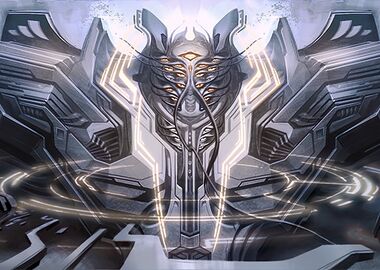 The legendary patron of the Cosmopolitan Worlds, also dubbed the Facet of Wisdom. Often reffered to as Nua-Xella (The Perfect Nu) by Mograts. Nu'Xelot was a mythical guardian who was tirelessly overseeing the peaceful coexistence of all Nu'Beings in Coraabia. It is said that this divine being resided on Dud enclosed in a titanic crystalline matrix forged of pure Xot that allowed it to perceive the multiverse in its entirety. After the creation of this matrix, Xelot supposedly never physically left its boundaries again, for there was no reason to it - Xelot could see whatever was needed whenever it was needed and the Nu was also able to communicate with any living creature far and wide. Following its departure from Coraabia, the gargantuan structure crumbled onto itself and the priceless Xot gradually dispersed into all corners of the multiverse.

The popular science sub-channel Lau-Baz3 tried to estimate the worth of all the Xot Xelot's seat was comprised of. The result stretched far beyond anything we could possibly relate to, relegating it into the realm of pure fiction. The Xot matrix would hypothetically weigh thousands and thousands of tons, making its nominal value trillion times higher than the combined wealth of all the civilized regions of Coraabia combined.

Certain nulogists claim that the Facet of Wisdom never actually left Coraabia - in reality, the Nu got tangled in webs of the powerful Nu'Khnuzuuk, who deceitfully vanquished Xelot and gradually extracted all lifeforce from the stranded Nu. Nu'Khnuzuuk then tried to misuse the Xot matrix for his nefarious schemes but to no avail. Unable to learn how to control its powers, Nu'Khnuzuuk spitefully shattered the matrix into billions of shards so that no one else could ever use it again.