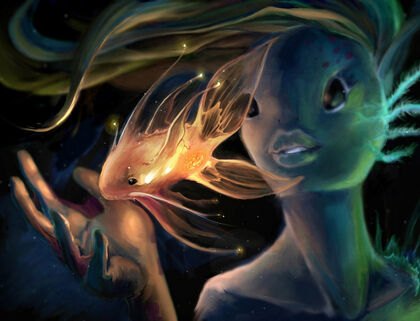 It is said that NiNiFe would need the worth of a wakken filled to the brim with Tun'g in order to completely relocate her nation.
(Coraabia Artist: Aaron Lovett)

NikThara NiptuGosh FeleSher (familiarly nicknamed NiNiFe by her people) is currently the highest chancellor of the Goshan nation inhabiting the dwarf planet Volkt. This modest - yet intellectually highly-developed - culture is facing a problem of its sole continent slowly rising from the methane ocean, a process which could eventually result in an existential disaster. The Goshans therefore focus all their efforts on raising funds to prevent this tragedy from happening. NiNiFe gained the favor of the Methane Council precisely by proposing a variety of projects that could prevent the loss of her homeland. As a result, the young and talented scientist became the supreme representative of her people virtually overnight, without any prior political experience.

NiNiFe intends to drill a series of underwater boreholes in order to lower the seabed by hundreds of metres. It will also be necessary to relocate the center of the capital city from the Kming-Lan reef to the deeper caverns on the edges of the monocontinent. Since the ambitious plans require enormous sums of money, NiNiFe is currently trying to raise the required amount in all corners of Coraabia.

NiNiFe was just a step away from signing a key treaty with the Waks, which would guarantee her nation a safe haven on one of the planetary poles of Waalk. Beneath its thick ice sheet, Goshans would find very familiar and hospitable living conditions. Goshans ultimately rejected the offer in a referendum as their weak economy simply could not finance mass exodus of the entire population.