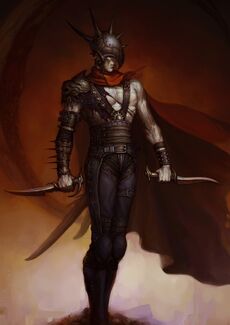 History describes Nakataar as a prototype of a ruthless tyran (see the picture) - his contemporaries, however, saw him more like a frightened psychotic neurotic.
(Coraabia Artist: XueDuan)

After their mother - Lady of Excavation Xirhanna - tragically died, two brothers ruled the Miner colony X-Tal for two years - Tal Nakataar and Tal Makard. The older Nakataar got soon dissatisfied with the diumvirate and got rid of his brother. He gave him an order to supervise the construction of a gigantic dam designed to forever stop the devastating floods that repeatedly wrecked neighbouring colonies. The service on the titanic construction de facto meant a forced exile for Makard and enabled Nakataar to run the administration of the greatest Tal colony by himself alone. Unfortunately, Nakataar inherited most of the bad traits from his mother; he was strict and uncompromising towards his subjects. He took them for nothing more but tools for gaining power, which was a mistake he was about to pay for in the future. In 190 Tu, he was put before the hastily established great Boroa-Tal and he was demonstratively executed one year later.

For a long time, Nakataar had been the last Great Tal, the last supreme Miner Lord. The end of the second century of Excavation tolled the death knell for the era of self-appointed dictators hailing from the same lineage in general. The newly formed Boroa-Tal (council of lords) provided a much wider range of nobles with a right to participate on the smooth control of the colonies. Virtually every Miner could have become a Tal since then.

Nakataar had a phobia of X-Tal Zombs whom he blamed for his mother's death. That is why he sent most of them after his brother to labor at the gigantic Makard Dam. He hoped the brutal working conditions would break their tireless resistance. The exact opposite happened though - due to a series of strikes and bloody coup d'etats, the Zombs reached a higher status than even before.