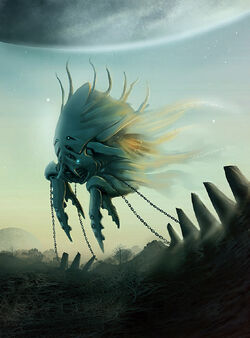 Mycorg - one of the most dangerous evolutionary stages of a planetary Mycoid.
(Coraabia Artist: Alex Negrea)

The word mycoid refers to a higher form of a transplanetary exomorph. Its physiology can be likened to a giant mushroom structure. Mycoids gather in colonies, or so called streams, and travel through the outer space in these formations.

Mycoids are vacuophages – they feed with the sole interstellar medium. They can suck it inside their bodies and deplete it completely. Then their unique 'metabolism' releases all the residual energy, so called mycovacuum, in an opposite direction. This gives birth to an unusual metabolic track, a perfectly tight space, just a few atoms wide. This phenomenon is to be called a string later.

Mycoids have happened to be significantly forming history of the civilized multiverse. The first evidence of their presence in Coraabia comes from approximately -55.000 Tu. The Mycoids encountered the planet of Xao which became the first known mycosated world of all. 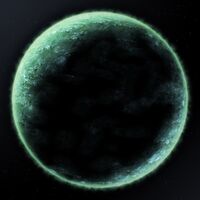 A process by which a planet becomes infested with mycoid spores.

Since the mycosation is triggered mainly by exceeding a temperature threshold, cold worlds with no or but a sparse atmosphere are not affected.

Myco-Waks from WaalkWak counted that it takes not more than 22 pounds of mycoid spores to start a mycosation of a medium sized world.

Without advanced life proof facilities a mycosated world is uninhabitable by most of the life forms in Coraabia. The first thing the mycoids do is to 'consume' the planet's atmosphere. Any life having the hard luck to stay around simply suffocates. As a second step the surface is covered with a so called mycomass. The mycomass grows and spreads by a spontaneous division. It clutches the planet firmly, creating a platform for substitution of the existing ecosystem by new generations of its own kind. Trillions of new spores and countless adolescent mycoids then leave heading for the open space.

Despite the fact that it is a relatively savage and violent lifestyle, scientists recognize the fact that mycosation made a continual extension of mycoids possible and so the existence of so many strings. And strings are essential for the contemporary panglobal economy.

Apparently, no effective procedure can save an completely mycosated world. Civilized worlds fear mycosation so much that they've spent enormous amounts of money in order to protect themselves from mycoid spores.

The mycoid strings enable the so called oscillations across the multiverse. They build a dense web. Coraabia is heavily interwoven by them. Still only four of the most compact strings are safe enough to allow a secure space travelling among several solar systems. Those four track the largest mycoid populations' movements.

Nevertheless, the complete mycoid itinerary has not yet been mapped and their final destination has not yet been revealed. The major herds disappeared in the far areas of Agoadan several thousand years ago. A number of fans and oscillauts try to trace the Mycoids. Most of them either don't return or die on an imperfect oscillation.

An advanced technology from WaalkWak enabled a contemporary boom of an alternative travel. Synthetic Wakian strings have made the traditional mycoid strings obsolete. What is more, unlike the mycoid strings they can carry sub-net, the transplanetary communication channel.