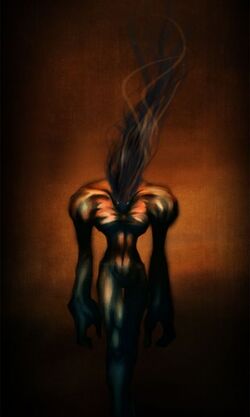 Many old legends of the talish city Ora talk about beings coming during the Haze, which - lured by the lights coming from the housing - lurk on the shadow's edge and wait. Patiently, without movement, they observe how the Miner houses turn off the lights and fall into darkness, one by one. Then they move out silently, like following an order from above, so that they have enough time to vanish before the Light Day - to the underground with their victims, which were always exclusively Miner women. These mythical unliving beings are nowadays called muulos, but similar beings in the Empire of the Circle were called Gadu Mhua'lau and those were feared by the commoners more than the possibility of an Atomo invasion. The difference from muulos was in their victims - the Gadu Mhua'lau usually kidnapped immature vatters straight from the reproduction vats. The tradition of the urban body kidnappers has a several thousand Tu long tradition.

Many speculate that the muulos really did exist - but it was a secret sect of ilokaj tal-eaters, which conducted punitive expeditions to the borders of constructed outposts of the so much hated living colonists. Muulos really kidnapped women and for a reason - to reduce the reproduction abilities of the enemy. It is said that Tals exterminated the muulo sect in several raids after their existence was revealed.

The act of murder is enveloped by legends as the beings themselves. Muulo first cuts an opening in the woman's belly, sticks its head into her and remains in this state for the whole duration of the Light Day, gradually filling the body of the host with its spit. After several Tols, the stretched skin (which servers as a vatt embryo) tears apart, revealing a new muulo. This is the alleged reason, why muulos worn feminine manes as their head decoration.