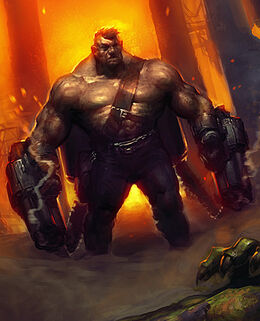 Mbreggo received his nickname in InCorps; he was already obsessed with fitness and hard physical labor back then.
(Coraabia Artist: Vladimir Bopchara)

Originally called Tal Mbreggo. Muscleman owned a successful xenogyms chain - this is where his nickname originated from - until he turned into a mercenary in service of organized crime. Gangsters of all kinds and ranks used to meet in his gym. It did not take long and Muscleman started to hang out with the outlaws outside of sports as well. One day he met an assassin called Pachyderm, with whom he established a close contact. It took just a few missions to create one inseparable duo out of those two. Only a pair of detectives Holmes and Wat-Son managed to stop their rampage. These two accidentally discovered the scoundrels in one of the abandoned snackbars at a jammed highway during their preparation for the assassination of the Agan ambassador. Muscleman was shot dead after a brief gunfight and Pachyderm was arrested.

Muscleman never liked to speak about his privacy. Nevertheless, his military past was unveiled by the security forces after his death. He took part in four war conflicts as a member of special forces of InCorps. This is where he acquired the rich tactical experience and honed his flawless handling of wide arsenal of weapons.

During his time in the gyms, Muscleman won the Musculon of the Year title three times. He always swore up and down his impressive frame and muscles were simply the fruits of honest hard labor, but an autopsy of his body revealed traces of wide range of steroids and exoanabolics.