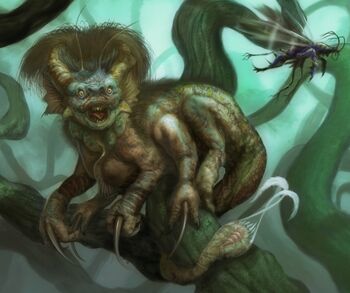 In 4075 Tu, xennodepartment of Pthral University obtained a private grant for research of unexplored areas of the Hoptar I xenoworld. The main goal of the expedition was to map zones of occurence of unknown ruuk species' and to study their social behaviour. Xennosociologist XeDr. Argylla also joined the expedition, which would become the peak of her scientific career. By coincidence, the expedition discovered a new unknown half-intelligent and socially advanced ruuk species living in the subtropic areas of Hoptar I. These ruuks form small groups, counting maximum of several dozens specimens, which create a diverse casted social hierarchy. Each group is divided into smaller work units, which continuously exert specialized tasks necessary for the survival of the whole pack.

The existence of natural division of work in this species is truly fascinating. Once several hunters embark on a journey after sweet jemge fruits at dawn, they are accompanied by a group of scout observers (who signalize potential predator attacks), helpers (who procure and sharpen flexible sticks for fruit gathering) and processors (who predigest fruit for further consumption and carry it back to the lair).

Individual members of the pack change several roles during the day, including the leading position. The scientists were even able to observe that the leading ruuk is always degraded to a jemge processor in each cycle. Doctor Argylla was fascinated by the social system of these ruuks and labelled it as "multisocial". The term stuck and its basis later became the reason for naming this species multiruuk.