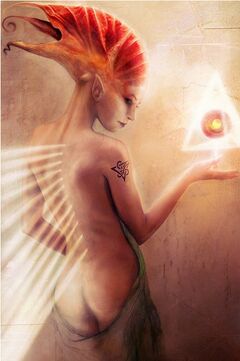 She's like a slippery ssagara, I hate her. Xochol paid a dear price, her mane drained down off her head and she had to go to chemox. I avoid this Anooka no matter what. -Boua Ti
(Coraabia Artist: Oliver Wetter)

Nowadays, she is the most famous and probably the best paid top model on Coraab. As a girl, she was discovered by Bulthai herself at a regional fashion show; to this day, she still remains under a long-term contract with her modelling empire BulthaiBaka. Anookas are a very rare race and only few tens of them live on Coraab – they are extraordinarily beautiful, yet deadly dangerous beings. While under severe stress, a young Anooka reflexively unleashes strong radiation pulses out of its bones that afflict other beings in its vicinity and irreversibly damage their health. That might be the reason why Mooda Rai lives in the most luxurious suite surrounded by a variety of accommodating and specially trained servants – her previous outbursts of prodigal anger caused a lot of damage.

De jure, no Anooka is responsible for its unconditioned reflexes; it is very difficult to successfully sue them for any sort of compensation after suffering from irradiation. During her fits of anger, Mooda Rai was able to poison her surroundings with deadly doses because of complete banalities. Today, the young model is in the hands of specialists which precede her fits with special soothing substances.

Mooda Rai has a pathological fear of physical contact. She is not willing to show up at public places and basically anywhere outdoors on any account. She lives in an air-conditioned and sterile luxury without having the faintest idea about the world which lies behind the walls of her residence. One day when a journalist from the sub-journal Humpitch! asked her what year was on Coraab, she answered that she had not seen any yet and so she did not know.