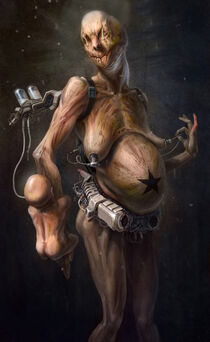 This legendary assassin frightened the whole C'Ora for a long time. It has only been a few years since Mina packed it in and announced her retirement. Offers for her autobiography rights went through the roof and her popularity on the sub-net has not faded one bit. The modern society has a serious case of fascination with this Ilokaj, since Mina never harmed any civilians and some would even label her actions as heroic. She personally hosed several high-ranked zaans from the movement of Those Who Have and she even delivered the deathblow to the feared Xun Tchwo. Her sniper skills were unmatched; it is told that she once hit some crook straight into the eye from six kilometres afar.

Mina Mord did not retire willingly. She was under intense pressure from Major Tsun, who did not leave much options open for her - she could either choose a forced exile or a death penalty. Tsun could dictate his conditions thanks to a team of sub-mags, which uncovered Mina's network of urban hideouts and false identities, literally putting her at his mercy.

In vast majority of cases, the assassin was on the government payroll, solving the messiest problems for InCorps. Some say that during her fifty years in business, Mina racked up as many as four hundred victims. While her advanced age leaves her dependant on unlife support and creates an impression of powerless old lady, Mina still ranks among the most deadly professionals in the trade.