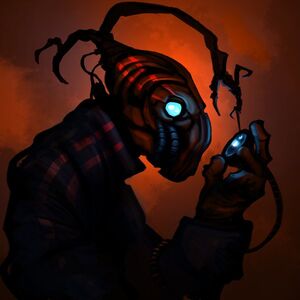 Mikron's specific trademark is that he commits his crimes each Tol always at 66H.
(Coraabia Artist: Steve Hamilton)

In pursuit of a sensation, centropolitan media describe Mikron as an uncatchable phantom, night demon, or even doom-bringing terror of the rich. But reality is far less shocking. Even though this famous safe-breaker organizes his night attacks on safes or valuables with corabit regularity, he rarely causes greater damage and avoids any conflict on principle. Although many people think that his look of a disfigured bael is just a smart mask, chubby night watchmen rarely want to risk the opposite – in fact, they are not interested in direct confrontation at all - especially when the stolen loot is well-insured. Because of Mikron's unexpected agility, any kind of chasing is almost pointless.

The true face hiding behind the mask, which is supposed to scare off too avid watchmen, is nobody else than Uufthakan acrobat Ryllon Sok, a cousin of notorious Tengo from Zapraskal's gang. During the night actions, he succesfully gets rid of his spare energy, which he retains from the late afternoon shows of xenocircus Xaaxox.

Although Mikron commits his burglaries relatively often, he never chooses the same place twice. Because of that, a regional branch of a big insurance company has started to provide a big discount to local inhabitants who can provide evidence of a previous burglary commited by this crafty burglar.