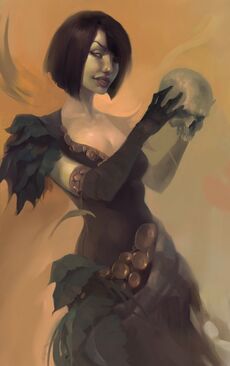 Menuki Demasand was born on Vestru, where her father administered one of local mining areas. After having two sons, he was a bit disappointed by the birth of a daughter and so he brought up Menuki to become wife of a mining foreman. However, this was not a dream future the girl wanted. When the right time came, Menuki used all her beauty and charmed Shi-Klikuo, an ordinary magrav pilot transporting resources between Vestru and Agan. At first, she lived with him as she had nowhere to go, but she eventually fell in love with him. Since all her attempts to succeed as a singer - her life-long dream - failed, Menuki succumbed to drugs. Shi-Klikuo became a smuggler to be able to finance the addiction of his lover. When one of his contractors tried to win Menuki for himself, the young couple was forced to escape to Coraab.

On Coraab, fortune finally smiled upon Menuki. She got rid of her addiction and found her way into Boi'Suthei, a famous C'Orian xenocabaret. She started her career as a choirgirl, but soon worked her way up to one of the main singers of the establishment. More and more important Coraabians started to woo and court her, including Bor Khal, the popular singer Talur Aj or even the esteemed fashion designer Tikaguo.

All the instant fame drove Menuki back to drugs and her heavy addiction to kerong destroyed her relationship with Shi-Klikuo. It was the charming Tikaguo who helped Menuki from her sore state and prevented the total destruction of her career. Despite his care, Menuki kept meeting with her other admirers behind his back. This broke Tikaguo's heart, which paradoxically fostered the creation of his most prized collection known as Enefu 5.