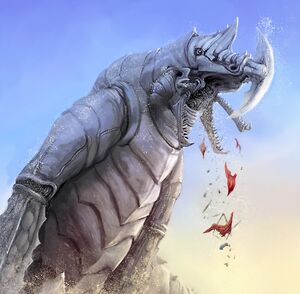 A carnivorous giant of the days long past, megaruuk inhabited Annor since the Urbreaks, times before the first breaking up of continents. Megaruuks soon ruled over the surface of the planet and became the apex predators on all three continents of Annor. An ordinary specimen could grow to ninety meters in height and several hundred tons in weight, which made megaruuk one of the largest ruuk in the history of the entire Xenozone. As the planetary civilization developed, megaruuks gradually started to vanish. Their last refuge were the silicon deserts of Ka-pai, which suited their hunting style perfectly and were of no interest to Annors. Solitary megaruuks waited for their prey for weeks in a state of partial hibernation. Once they smelled the approaching food, they immediately charged to hunt it down.

Despite its strength and massive constitution, Ka-paic megaruuk relied on the element of surprise as the primary hunting tool. It attacked from its underground lair by piercing its axe-like horn deep into victim's body. As it pulled the horn out, the prey was ripped apart and usually died from exsanguination or physical trauma. Megaruuk then dragged the limp body underground and proceeded to calmly consume it.

Megaruuk was always an object of ambivalent awe among Annors. Men carved amulets in the shape of megaruuk's horn - preferably from the ivory of the slain giant - as a symbol of strength. Some ancient texts give eyewitness accounts of epic fights between megaruuks and dynirs that were forced to move to the arid south as the civilization sprawled further. Annors viewed these titanic confrontations as natural catastrophes and signs of impending end of the world.