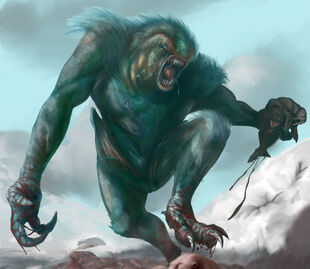 Megadonts are virtually nowhere to be found in the wild today. They are used for Annorian ceremonies or in agriculture.
(Coraabia Artist: David Melvin)

A long time ago, when strong family traditions controlled the everyday lives of Annorian people, defeating a mature megadont in a ritual duel was believed to be the rite of passage into a real warrior's life. Megadonts were cultivated mainly for such duels; they have been treated as animals for long centuries. These brutal and insidious beasts need no weapons, as they get by with five retractable tusks which stick out of their mouths in opposite angles during a fight. The upper two are called Knodragh and are used mostly for deflecting hits from weapons or during mutual fights for females. The lower are called Orokach and are used for the evisceration of their prey from the bottom up. The last tusk, which can slide out of their horned tongues and which is called Nomraikh, is used for stabbing of vulnerable spots. Conveniently, it is located on the eye level of Annorian warriors.

These days, megadonts are bred primarily in Annorian nature reserves. Due to their above-average animal intelligence, their position is often more akin to a protector of particular territories rather than its exhibit. More and more megadonts are starting to prefer vegetable diets over meat - however, all visitors are strictly prohibited from feeding these hot-tempered creatures.

The tradition of holding duels with megadonts in order to let young men into the warriors' caste is currently preserved only in the highest circles of the Annorian aristocracy. Every Annorian Lord had to defeat a megadont in a fight at some point - if he did not feel up to the task, he could get into a fight against a male with severed tusks. The weakest characters were even allowed to beat a megadont that has been tied up and put to sleep with strong sedatives.