In Mogra called Gan, often adressed as Oigha in coraabish, Laikh in language of Annor. 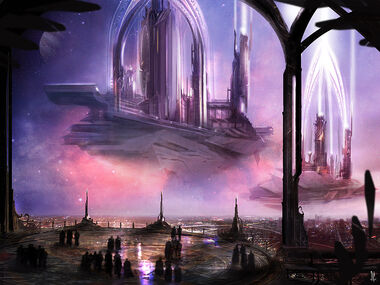 In backgrount you may see several buildings of Agada administration complex. In times before Liga, it was mainly used as headquarters of overplanetary defence admirality.
(Coraabia Artist: David Lecossu)

Liga is an advanced transplanetary security agency based on central world Agan in Cosmopolitan worlds. With it's potential and competences, it is the most elite security organization in all of Coraabia. It intervenes whenever necessary, it's main goal to protect law and order. Members of Liga partake on their autonomnous missions and tasks, never as part of regular military units. Their role in military conflicts is purely preventive, executive or diversive.

Liga's headquarters is part of government komplex of Agada, situated in central region of Agan.

Liga was established by Pachdan in 4044 Tu on agan government's request.

Pachdan founded Liga with fifteen Teams of 3-5 members, recruited from elite forces of all known multiverse regardless of their race or past. Size of the Liga changed over time, but it's methods and creed of perfectly coordinated operation teams prevail. In 4121 Tu there were nineteen Teams, from 4171 Tu number of teams oscillates between twenty to thirty ligan operation teams. 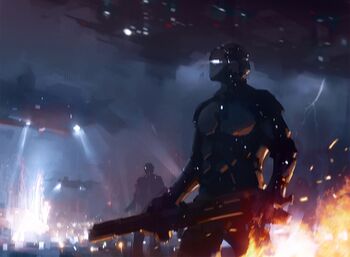 Ligan is the most common term used for Team members of Liga. Civil employees of Liga are colloquially called ligaro.

Office responsible for electing new ligans into their function. Members either register themselves (Lig-mar) or are approached by Lig-ra directly ([[Lig-dan[[). Head of Lig-ra is the liganor himself.