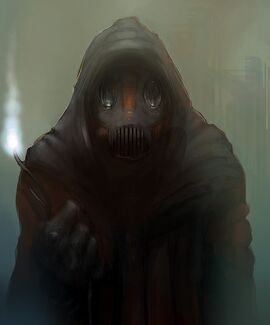 A lachto begging in the streets, scaring away any tourists that may have been around. Despised by the locals, lachtos currently lack any sort of respectable position in the society.
(Coraabia Artist: Markus Lovadina)

Many Unliving emerge from the reproduction vats with some kind of disability. Some blame the degeneration and inter-breeding of the native tribes for such congenital diseases while others tend to point out the awful conditions in which they are usually born. Nowadays, every 700th vatter comes to life as a keachta'lachto, the unwanted or the crooked one. During the old ages of the Unliving states, such sick beings were usually killed right after their birth, but those conventions are currently prohibited by the Coraabian law. However, this solidarity has produced a long-term problem, as the Periphery is now full of poor lachtos. The overwhelming majority of urban beggars, who march through the streets in groups of up to fifty, is recruited from their ranks.

Unlike most of the Unliving, lachtos cannot live without breathing, although their vulnerable organs cannot stand Coraab's brutal atmosphere. They are therefore forced to wear special helmets and are allowed only into particular areas outside the central Sectors.

Many scientists and specialists, including the xennologist Xed, have studied the issue of lachtos. Even though Xed's experiments have seemingly proved that the hereditary traits of the entire Unliving race degrade with passing time, most Coraabian scientists are systematically denying his hypothesis. Nevertheless, the Great Coraabian Stem Cell Genebank (G.C.S.C.G.) was established in 4233 Tu as a reaction to his findings.