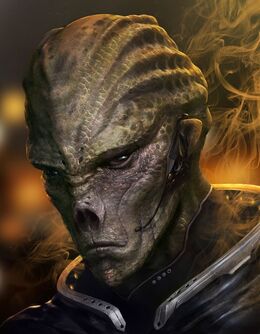 The growing power ambitions of Kyberens may dramatically threaten the current political system of WaalkWak in near future.
(Coraabia Artist: Marek Okoň)

The paramilitary troops Kyberen were initially established to defend those few mining moons orbiting the WaalkWak complanet. However, their scope soon included the whole system - quite a few Tektoniks began to use their services and transportation consortia or extravagant celebrities did not hesitate either. Kyberen commandos intervened in several regional wars, guarded top secret science unicomplexes or assisted during the evacuation of bombed WoQaark in 3351 Tu. Wide variety of specializations and great professionalism ensured Kyberens an estemeed status in the society, which sparked a concerned backlash among government circles - the ambitious mercenary commandos seldom hesitate to exceed their competencies when the opportunity arises.

Almost any citizen of WaalkWak with enough cash and necessary government clearance can hire these Wakian mercenaries. On several absurd occasions, this liberal regulation led to two Kyberen teams facing each other on the battlefield. The troops always kept their professional honor though and never faltered in massacring each other.

Kyberen leaders plan to gradually weaken the power of arrogant Tektoniks and replace them in the structure of Wakian military forces. They invest considerable share of their earnings into building of secret bases and into purchasing nuclear weapons. In the history of WaalkWak, such militarization of the private sector is completely unprecedented and might eventually harm the whole society.