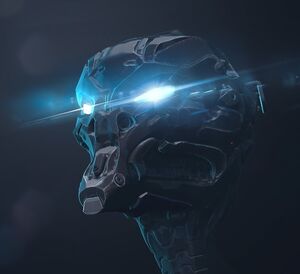 The venerable Kwa-Sokkk, the head guild-master of the 100-son boter factory. It is hardly possible to speak this name without an appropriate amount of respect. Already as a youngling, this Wak amazed everyone with the rapid speed of his career progression. Kwa-Sokkk began with the boters of the WaBBo guild, but this place did not offer him sufficient freedom. Every single time, when he tried to experiment, the conservative management stopped his project. Kwa-Sokkk gathered all the available know-how and together with several elite boters tried his luck in the 100-son company. Here he worked his way up to the guild-master title, leaving everything else behind - friends, family and also his former body. His reserved attitude to everything biological is an inspiration for many kyborgized managers of 100-son, which are willing to do everything to strenghten their position in the company.

To keep the prestigeous position of the head guild-master of 100-son, Kwa-Sokkk has to use all his wits. By finishing a bot prototype, nodays known as the legendary Kodo series, he played his aces in the right time. Shares of 100-son rapidly jumped upwards and the ambitious Sokkk claimed all the merit for himself. It is often speculated that it will be him, who will eventually replace tektonik Sqquukna on the post of the military commander of WaalkWak.

Kwa-Sokkk enforces loaylty with a range of indiscriminate methods. The executive leadership of 100-son rather recalls an orthodox sect - the members are bound to celibate, are oblidged to take forbidden stimulants, regularly undergo drastic procedures leading to their "absolute machine cleansing". Who is not at least 50% kyborgized, has absolutely no chance for a any significant career progress, while Kwa-Sokkk remains in charge.