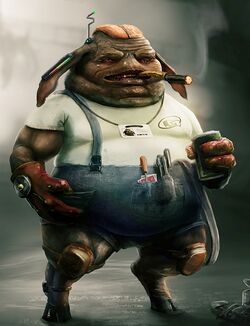 Kopibor is the grandmaster of Corish guilds, once very important Coraabian bot manufacturers. Kotoi are naturaly proficient with technologies, they have reputation of obsessive perfectionists. Kopibor used to build small machines in his childhood and soon became employed as service mechanic in Coraikh workshops. He spent several Tu by the debotage line recalibrating hacked interware. His organization skills were unmatched, an expert that would always finnish his job. After privatisation of Corish guilds in 4261 Tu Kopibor's career skyrocketed. New executive board suggested him for the post of guildmaster, giving him the reign over managment and production planning. His primary goal is now to revive the glory and fame of boter workshops and to become a true competition for Waks.

Corish guilds haven't introduced any innovation to the field in a few centuries, all they do is recycling old ideas and methods - to a Kopibor's great displeasure. In recent Tu, he plans to start production of new series of Coraabian battle bots. According to information from corish boters the series is called Coreekarr. InCorps and Bahoofa expressed interest in aquiring them in the future.

In 4262 Tu someone sabotaged industrial plant of boter guild 100-son. Intentional error introduced to the assembly line forced thousands of Gorko-bots in C'Ora to be recalled and repaired. This incident seriously hurt Wak boter's reputation. Noone else than Kopibor himself was responsible for the incident, as he despises the Waks and considers them to be arrogant quackers with no professional honor.