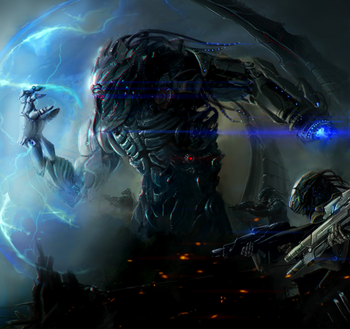 Mercenary leader Koburang was a true champion of the Qu-Puic wars of the Seven Saint Worlds. While also a son of a Qu-Puic noblewoman, exotic blood circulated in his veins thanks to his father, whose ancestry is shrouded in mystery even today. Koburang was twice as tall as an average man and his deep resonating voice made him an inspiring commander. It was soon apparent that his leadership skills were unmatched and he eventually assumed the position of the supreme commander of Qu-Puic armed forces. It was at this time that he became one of the closest confidants of the insane Emperor-Prophet Quagh-Puo - they both viewed brutality as a necessity in subjugating the population and they both believed in the holy right of Qu-Puo to rule the entire multiverse.

Koburang spent most of his life away from Qu-Puo. Before his career in the army, he had fought in many wars from Bolga to Rad'Zaak. He then returned to his homeworld as a battle-hardened - and battle-scarred - celebrity warrior. During his campaigns on Volkt, he was lured into a trap and the ensuing bloody skirmish costed him his left hand. Koburang remedied this handicap by donning his trademark armor, which he never publicly took off again.

The most bitter pill Koburang had to swallow was when Ibar Sigor betrayed Qu-Puo, defecting along with his elite neo-guardists. From their friendly talks, Sigor gained deep insight into Koburang's approach to waging warfare. Knowing no peers but each other, these living legends became mortal enemies whose cataclysmic confrontation seemed inevitable. Yet, the great question of who was the superior strategist remained unanswered - Koburang unexpectedly succumbed to sepsis sparked by his old wounds.