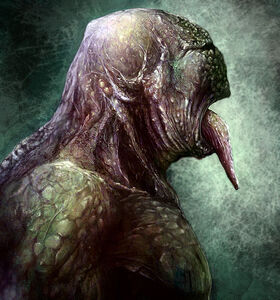 Klakop is a xenno race that originates on Ymef. During the strunification in 3501 Tu, xenauts found out that klakop's bile sacks contain a substance suitable for curing degenerative limb illness, which is very common on Annor. Thanks to pharmaceutical use, this race was soon spread also to many other systems. In the chaos during the second reddan offensive in 3915 Tu, several Coraabian farms breeding klakops gotdamaged, which allowed many specimens to run free and start spreading in the upper layers of the Dump. When it was found out that substances from their bile sacks boost the progress of degenerative illnesses in the unliving, their rapid expansion was stopped in 4012 Tu with a massive chamical deklakopisation.

The uncontrolled spreading of klakops on Coraab soon escalated the tension between Annor and the unliving. In 3925 Tu, several unliving got killed during a deklakopisation attempt of an annh farm in the Or'Gelpe valley. The Circle lodge judgement favoured the friendly Annhs and criticized the unliving. Only thanks to the dung uprising Gu-Rang in 4270 Tu the unliving managed to push forward a complete ban of all klakop import to Coraab.

In 4259 Tu, Xenauts discovered ruins of an unknown civilisation on Ymef and revealed with great surprise that this civilisation celebrated klakops as godly beings. To underline this belief, their god of knowledge was carved with a head of a klakop. Xenoarcheologs are in feud to this day, whether klakops were gifted with higher intelligence in the past or whether the members of the mentioned civilization had just very low expectations.