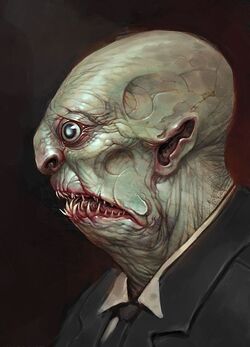 Known also by his pseudonyms Gastroz or Zippzul. Khuzdul belongs to Unliving minority that instinctively devours only solid food. Eccentric Ilokai ate bazaar-bought candied pukeroaches and oroboslizards at first, but also grew fruits. Later, however, he started to feel strong cannibalistic urges. Khuzdul learned of Min'Oran cannibal community on oroi and started attending their meetings. Later, he poisoned everyone at their banquet and took home the best tasty parts. In anonymous or-log he proclaims that "Devouring other cannibals is like eating meat with meaty stuffing. It's irresistably delicious." Autohorities didn't solve the case to this day, Khuzdul's identity remains unknown.

Khuzdul is very cautious, so noone finds out about his devious tastes. He is employed under false identity, in company acts as tardy loner. His work with the bodies shows chirurgic precision and after he finishes, thera are no traces on the crime scene. To this day, the cannibal supposedly consumed illegaly horrifiing 400 victims, mostly Ilokai, Dungs and Vatters.

Khuzdul always liked his buddy, Vatter named Pismealh. He even let Pismealh to prechew the meat, because he believed the saliva adds a "fancy flavor". One night the devious urges kicked in and he ate poor Pismealh. Khuzdul still has his frinds skull, laying atop of secrificial altar dedicated to Nu beings.