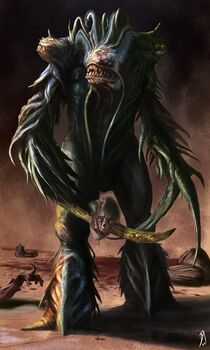 They appeared seemingly out of nowhere. Those colossi move so silently... the rear heads stampeded the keps who assaulted us from all sides! Seven guys had to be put six feet under on that day. -Bon Mralsk
(Coraabia Artist: David Melvin)

On Annor, keporuuks are nicknamed OmmoKora (bearded mouths). Ymef has become a traditional raiding destination for profit-seeking Annors over the last centuries. They gather ruuks from all over the Xennozone and sell them to customers all around Coraabia. The keporuuk is no exception. Nevertheless, unlike the other ruuks, it is facing extinction in its original biotopes due to the intense hunting. Its reproduction is much more complicated than that of other species - a symbiosis of three newly-hatched individuals - each providing a different basic life function - is needed for sustaining keporuuk's organism. Several incompatible specimen thus appear in each brood; they serve as a fodder for the other siblings. Scientists have yet to fully explain this atypical life cycle.

Keporuuks are cannibals that grow to a respectable height of three to four metres. They instill fear in unaware creatures with their shrieks (given out solely by the rear head) that can be heard over miles and miles away. Keporuuks are explosive and unpredictable creatures but they do not feast on their victims. Every meat apart from its kin's is a lethal poison for any keporuuk.

Annorian xennoengineers went to bizzare extremes in an effort to cultivate the keporuuk breed. In the famous reservation Al-bepai, one can see a herd of five-headed, a couple of six-headed and even one seven-headed specimen. What the visitors do not know is the fact that these degenerated, miserable cratures must be fed intravenously and that their lives last just one third of the natural lifetime.