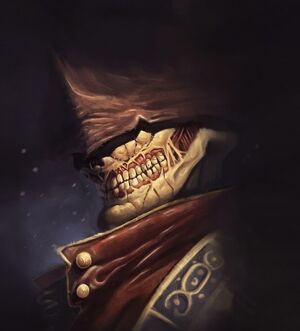 Katangh (also known as Kaddan) was a feared warrior coming from the Unliving settlements surrounding the radioactive Lake Wat-Pagae. As time went on, this ambitious Unliving worked his way up the Atomic armies and became one of Zomboss' favorite generals. Katangh radically reformed the Atomic army. During military campaigns across Coraab, he wrote down his memoires discussing and describing his ideas on leading warfare and summarizing his experience from fighting. The only remnant of his numerous works is the log translated as Arru'taal (A Fierce Fight). The general used to participate in frontline combat, which once almost sealed his fate. While besieging the centropolis Tor'Thubo, he got hit by an acid bomb. Although Katangh survived, the injuries to his sight were so grave he became blind.

One of his lieutenants eventually served as his eyes, an Unliving only known as Regu, who followed him everywhere. In the period of the so-called Atomic genocide, general Katangh learned about the death of Zomboss. With the remaining forces under his command, he made a final stand against the combined forces of Bael warriors and bots named simply The Battle of Three. The Atomic army succumbed to the overwhelming numbers of its adversaries and its general unceremoniously fled from battle.

The leaders of the Unliving tribes saw Katangh as a threat and they set a bounty on his head. An elite assassin and poisoner Di'Khe picked up his trail and the general died of unknown poison soon afterwards. Katangh's lieutenant Regu buried the bodily remains of his master deep in the Rusty Dunes. He followed this piety act by committing suicide as he voluntarily marched into the eye of a raging metal storm.