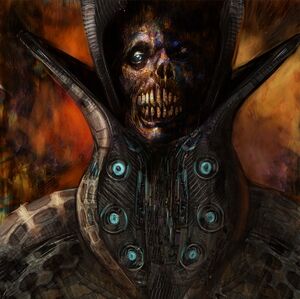 The prophecies are fulfilled by believing in them. - Katammoro
(Coraabia Artist: Goran Delic)

Katammoro arose from a recycling pouch marked by great power. As a consequence, the osteomancer circle decided that he is a suitable adept to be accepted into their ranks. Katammoro's training was however disturbed by the unliving leader Zomboss, who pushed hard his vision onto the osteomancers. The Atomo shamans stood no chance to resist the influence of the conquering leader and quickly succumbed to his pressure. However, Zomboss calles to the services of the Atomo empire only selected individuals. Katammoro was not amongst them, which caused him great disapointment. The legends say that Katammoro's inner eye opened prematurely and he managed to peer into the near future, embalmed in the fires of pain. There he saw the zomb house Paga on the pinacle of power, flooding the world with suffering only to be thrown into their own doom in the end.

Katammoro zealously preached about the end of his tribe and due to was is forced to flee. He found shelter in the Empire of the Circle, believing that a small treachery leading to Zomboss's fall will save millions of unlives on both sides. The Ilokaj listened to him carefully, but were more interested in the secrets of osteomancy than in his unsure prophecies. Katammoro's treachery thus carried a bitter taste of failure.

He became free only with the progress of the atomo armies. The Du'Bael - who freed Katammoro from isolation - surprisingly listened to him and believed in his visions. They turned away from the Atomos, who had no clue what caused the loss of their precious ally. Katammoro fell into despair- is he the one to fulfil the prophecy by bringing the downfall of his house? He helplessly observed the gradual downfall of both empires from Mino, where he is remnained tortured by his consciense until the end of his days.