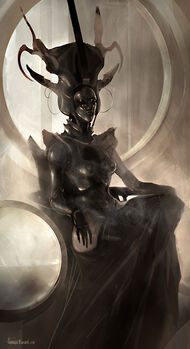 Kanaan as the Wr'Coraa during a Circle Council meeting in 4178 Tu.
(Coraabia Artist: Soren Bendt Pedersen)

One of the two current members of the so-called Opposite Seven. However, many traditionalists dispute her membership in this prestigious group. And not only that - nobody in C'Ora has ever seen Kanaan without her corabit exoskeleton. Some say that she is nothing but an ingeniously designed bot, while others would be willing to bet their lives on her being one of the formally dead zombs from the ancient times. Even the circumstances of her arrival remain uncertain, as her ree was allegedly found in the depths of the Dump during the initial excavation works on the first central Sectors of C'Ora. However, no eyewitness testimonies survived the ages, so the origin of Kanaan remains shrouded in mystery.

Up to this day, Kanaan has been able to consistently stay at the highest levels of C'Orian politics, with her only serious mistake being her cooperation with the despotic autocrat Tal Honta. During his reign of terror, Kanaan raided the Centropolitan treasury in a bid to destroy her competitors. She was also the only Unliving whom Honta left in the government, which tarnished her reputation even more later on.

Kanaan has been repeatedly forced to escape C'Ora but she has always been able to force her way back. Zombs have always despised her and even tried to get rid of her on a number of occasions. However, her modified exoskeleton has allowed her to survive all such attempts. It is said that Kanaan also wears it because her body has been mutilated by a bio-acid and her pride forbids her from showing that to others.