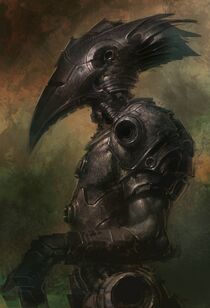 Alongside her identical twin, Kogga, Jogga is the ideal example of how much can two apparently similar things differ. The two spent their early days in a luxurious residence on the periphery of Val-Mag. The defining moment came 4245 Tu, with the spirited Jogga joining her father on a mission to the crisis-hit Bolga, where he was supposed to work as an independent military observer. However, the routine mission soon turned into a tragedy, as the father was killed in a clash with the fundamentalists soon after the start of the Bol-Gard. With Jogga taken captive, her grieving mother decided to commit suicide, a moment which changed the relationship of the two girls forever.

With the Lirmar armos believing that she, as the daughter of an officer, knew about the activities of foreign secret services on Bolga, Jogga was forced to undergo brutal interrogations and even torture. Luckily, she somehow managed to escape and found her way back home. After learning about her mother's death, she accused Kogga as being responsible and even threatened to kill her if they were to meet again.

Strangely enough, Jogga returned to Bolga and joined the revolutionary forces, using brutal and merciless methods to promote her causes. At one point, she even decided to kill hundreds of innocent civilians in order to hit the opposition as hard as possible. The transformation of a human rights activist into a fearless killer was complete, with Briia Pawa deciding to offer a huge xot reward for her head in 4265 Tu.