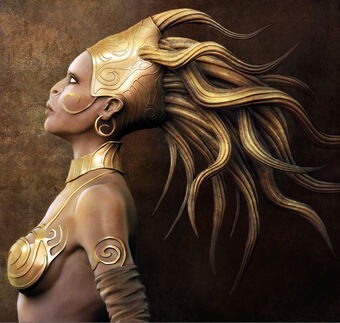 Jamamba is one of the last Coraabian She-Zombs. This fact doesn't mean much to her though, since she completely loathes all the remaining members of the Opposite Seven.
(Coraabia Artist: Riyahd Cassiem)

Nobody is able to estimate Jamamba's exact age these days – Ka'Breechai, which is how Jamamba vainly calls herself in the Zomb'Skaraa language, anxiously hides it. The first mention of this old She-Zomb comes from the ancient Miniz's era. After that, nobody knew anything about her for centuries; Jamamba probably stayed shrunk in one of her underground hideaways in order to save time and maintain herself in a good shape as long as possible. She is counted among the Opposite Seven – a small group of female-looking Zombs to ever live on Coraab. To this day Jamamba is, together with mysterious Kanaan, one of the last of her "species". The She-Zomb held a variety of important posts in the society during the centuries of her unlife; she was presiding at the city's Circle Lodge between 4017 Tu - 4090 Tu.

After thousands of years of her successful career, Jamamba has withdrawn into complete seclusion and in her isolated palatious residence, she dedicated all her free time to expanding her panoptical collections. After watching the sub-doc Ik yon Ik, which is the only one that brings eyewitness accounts of Jamamba's unlife in the last years, many claim that the She-Zomb has gone completely mad in her advanced age.

Jamamba is simply obsessed with her bizarre servants. She writes sweeping theatrical pieces or recital epics for them, which she then satisfyingly observes with other creatures from her collections that make up the "audience". Many say that her Zombic abilities have left her in old age – based on their experience, though, her servants like Mimpire or Gutlax would very quickly dissuade such opinions.