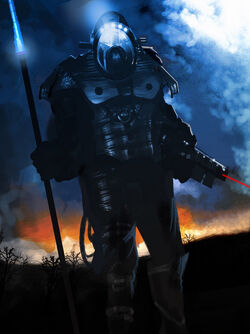 Although the investigos units are doing a good job, the community does not view them favorably - their blunt behavior resembles that of their animal companions too much.
(Coraabia Artist: Randall MacDonald)

Also simply known as sniffers in the police lingo. Whenever there is a need to track down something, the investigos enter the scene together with their animal friends. Every investigo in a team has a different specialization - finding caved-in civilians, sniffing out smuggled drugs, or tracking illegal immigrants. The animals are chosen according to the specialization of their masters. Be it houndungs, hur-loons, specially bred bakuro lizardeons or some domesticated ruuks, investigos achieve the best results in tandem with them. Investigos are often sent into the action as a support for poly-coroners and xeno-ops units. They seldom operate on their own as they lack any serious combat training.

The finest hour of this department came during the case of the so-called Rusty trail. Thanks to a sniffer called Trepodunk, investigos uncovered a vast smuggling trail connecting the central Sectors. Hidden in the underground sewage system, the trail was also conveniently erased from all city plans after bribes from local mafia changed hands.

Investigos are often publicly lambasted by Coraabian media for addicting their sniffers to drugs they are supposed to find. One infamous head investigo once replied on the sub-net that this approach was indeed very effective, as it did not cost the city budget a single extra trin since they only used confiscated drugs. He was soon forced to step down due to a strong public backlash.