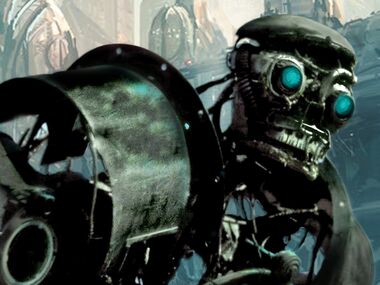 Botters of WaBBo guild designed the Indigo with one simple goal in mind - to provide impenetrable defense for the owner. Only a few dozen customized prototypes got to Coraab. It's cost is so high only the highest society members are able to afford it - waiting time for Indigo-bot might sometimes stretch to 5 Tu. Results are well worth the wait. There is no instance of owner getting killed in presence of his Indigo-bot on Coraab. Robot, powered by specialised nuclear reactor, is an autonomous fighting unit that requires special arms licence - its performance and potencial make them perfect and often used frontline forces in many power struggles.

Famous topmodel Mooda Rai was the first Coraabian to own an Indigo-bot. Only thanks to the bot she survived attempted assassination, supposedly orchestrated by ultra-militant modeling agency Kraasox. The sub-celebrity, in attempt to improve her security, recently ordered a second bot.

Coraabian branch of WaBBo corporation tried to cover up one instance of owner dying in presence of his Indigo-bot. It was all quite bizzare - Indigo number Cor-47 had an gyroscope array malfunction and during a regular bedroom inspection trampled the bed with owner still in it.