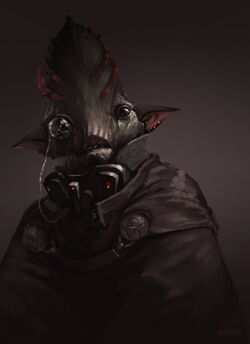 The publication of The Expert Ethics of Culture literally earned Ikrill a fortune in a matter of years. To this day it is one of the most cited scientific sub-logs on Coraab.
(Coraabia Artist: Chase Toole)

A significant philosopher and writer, a representative of the eighth generation of the highly esteemed WaalkWakian immigrants. While most Soops on Coraab as well as elsewhere are fully devoted to natural and applied sciences in which they naturally excel, Qok Ikrill spent the time in deep contemplation. He began to write soon after graduation. To a venerable age of ninety-two Tu, Ikrill managed to publish nearly sixty compendia concerning ethics, morals, and subjective perception of the world. His sub-log bearing the title The Expert Ethics of Culture was even nominated for a prestigious literary prize Sto-Mag in 4204 Tu. Doctor Ikrill went down into the textbooks and in a large poll conducted by the Coraabian University, he was even chosen as the peacemaker of the century.

Ikrill's comprehensive pentalogy called The Law of Prax has become a readers' favorite in virtually every district of C'Ora. The book perfectly portrayed the everyday joys and sorrows of the law enforcers. To give his books a hallmark of realism and atmosphere, Dr. Ikrill didn't hesitate to serve in Sector 6 as a police psychologist for a few Tu.

Qok always supported non-violent solutions to conflicts. However, he never hesitated to unscrupulously attack various transplanetary churches in his books. This stalwart position often attracted violent lynch mobs to his public readings. The situation once gone so far the police had to evacuate Ikrill by an antigrav from a tiny square in front of a crowd of angry Takkomonks.