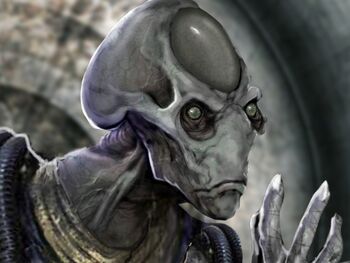 There is a saying that trading with Kithu is like trading with a hooker - you will leave satisfied, but the other side is making all the money.
(Coraabia Artist: Scrybe)

Ichor comes from a non-numerous ethnic of Skru-Kiths, who live on the distant Searth. After the death of Gichon, I-Kith finds himself in the position of the oldest ethnic member and as such is nominate for the lifelong post of the leader of the local skru-kith houses from the transgenerational pangrav Dicho. Ichor manages to increase the normed index of wealth gain of the I-Kith house during just a few Tu, proving his eligibility to be the head of his community. Ichor takes over the role with great responsibility. Based on his lineage, he gains massive support of Kiths, buys Dicho from the greedy Skru and immediately starts with repairs. Thus the consortium Ichaat is established – a trading organization seated directly on the huge magravs with Dichem as their flagship. They provide interstellar trade with Searth.

The name Dicho lures in majority of the exoplanetary skru-kithish house-ships, on which lives the luckier, gravity-less part of the nation. A numerous fleet is created, taking hold of the trading bi-iont routes leading from Searth through Golgakk all the way to the Xenozone. Thanks to Ichor's defense policy, Ichaat consumes the competition and inconspicuously gains favour of small-traders and Searths with desire for luxurious goods.

Despite huge size of the pangrav, the surviving civilization is not big enough to sustain sufficient quality of the gene pool. Skru-Kiths thus suffer from various degenerative illnesses and Ichor himself has fertility issues - similarily to almost half of the population. He invests huge amounts of money and effort to win the favour of Ibar Ratan from the Southern Cloud, who is believed to own the only really functional technology for cloning of complex genome.