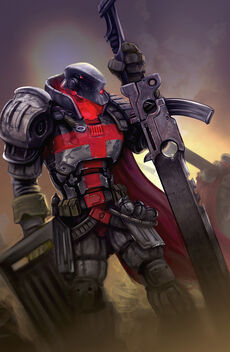 The esteemed founding father of the House of Ibar, veteran of the Seven Saint Worlds' War, first in the line of Lunar Princes. Sigor came from an impecunious family of Bolgan old-time residents who made ​​their living mostly by farming. He left Bolga in 932 Tu and driven by his desire for adventure, he enlisted in the army of the Emperor-Prophet Quagh-Puo. Pulling himself up by his bootstraps, Sigor soon became an elite neo-guardsman and received ruler's considerable favor. After successfully conquering Korrhan alongside his men in 944 Tu, he was awarded with estates in the remote Southern Cloud as a token of the Emperor-Prophet's gratitude. However, the prolonged wars were still dragging on, which took its toll in the form of growing casualties on both sides of the conflict. Sigor eventually betrayed his master and joined the ranks of Mogran-Ekhroan Resistance. Quagh-Puo was defeated and the former neo-guardsman founded a dynasty in the South, whose fame continues even today.

Sigor's original name was Daramur Bo-Sillakhora. Yet the young neo-guardsman wanted to sever all ties to the lineage of his lowborn ancestors and appeared in public solely under a pseudonym. Ibar means something like Undefeated in Bolgish. Sigor made sure all references to the original family name Daramur would be destroyed, bar none. The real history of the House of Ibar therefore remains shrouded in a veil of mystery for future generations.

Ibar Sigor lived to an extremely old age. The Lunar Prince was so vain he refused to sire offspring and, in addition to a series of rejuvenating treatments, underwent a complete DNA-sterilization. He brought home an extensive booty from Qu-Puo which included a valuable cloning technology. As a result, only his genetically identical copies might claim the Lordly See in the future.