'Haze cultures, also known as cultures of Twilight, Gray cultures, or Haze cultures is a grouping of little known ancient communities that inhabited Coraabia - and possibly areas beyond the currently known multiverse - until cca -31,000 Tu. These hyperdeveloped cultures can be divided into more distinct ones, although many of their empires left behind only little traces and sometimes not even their names are known. It is estimated that some uncovered relics and technologies originated even before their time from cultures about which current civilizations know absolutely nothing. 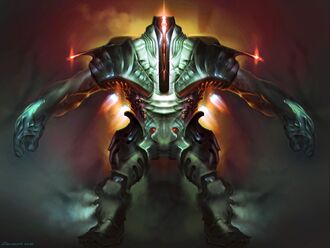 Artist's rendition of physiology of a member of the ancient Haze Culture Eei about which we know practically nothing today.
(Coraabia Artist: Gil Rimmer)

Their name is derived from the millenial eclipse of Unaar caused by the arrival of Dumper ships and the ensuing creation of the planetary Dump on Coraab.

The last proven sighting of members of any Haze culture come from cca -10,000 Tu.

A highly developed civilization of traders and technologists.

A Haze culture close to Coraabians. Pthars were in close contact with Dumpers and Coraab as well as other dumpworlds became final resting places for many of their prized artifacts, whose extraordinary capabilities and potential show just how developed Pthars were.

Only few fragments were left behind this hyperdeveloped culture. The most famous example is the legendary Ee script, found carved into withered obelisks and domes spread across the entire multiverse.

Sacred semi-divine beings. Their existence is still a matter of disputes to this day.

The youngest Haze culture. Ur-ancestors of Baels, nowadays regarded as extinct. However, there is a growing amount of evidence and speculation that some of its members still operate across Coraabia.